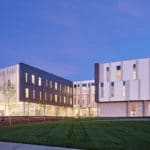 This was to be Olathe’s fifth high school and the goal was to give it a collegiate flexible classroom concept.  Designed by Hollis & Miller and Stantec the building does just that. With four “neighborhoods” to house each of the grade levels and a large open commons to encourage interaction.  The school has two 21st century programs designed to arm students with career focused skills. One is the Public Safety Academy, for aspiring police and firefighters. Another is the Green Tech Academy, for careers in botany and renewable energy.

Henderson Engineers was brought on to design an HVAC system that would allow maximum flexibility but also allow the district to monitor all systems.  Henderson designed VRF for comfort cooling of most of the building. Separate systems were designed for the DOAS, Gymnasiums and Auditoriums in the facility. McCown Gordon was brought on to manage the construction of the project and bring this large effort into budget.

After a competitive bidding process, the district selected Associated Air Products, Inc to provide all of the comfort conditioning VRF equipment on the project.  The product was LG VRF equipment. Henderson had designed a BMS that not only allowed for better control of the system but advanced detection of issues. The LG VRF equipment had to be able to interface with this system which was implemented by Siemens.  The system was then managed by Henderson Building Solutions. This created a partnership between the three companies to make sure the systems ran to their optimum potential.

The school district was able to save a considerable amount on the equipment in this project that they can use towards other items included in the bond.  There are 22 separate systems and they remain some of the most reliable to date.